This “fine young quintet” (J. Fordham, the Guardian) was formed in order to record an album of Rob’s original compositions for Edition Records, as a result of his winning the Kenny Wheeler Prize in 2016. Opting for the format of a power trio, the rhythm section consists of rising stars Corrie Dick and Tom McCredie, and the album features an expanded line-up with the addition of Joe Wright (tenor sax) and Joe Webb (keyboards). Drawing influence from artists such as Ali Farka Toure, Bill Frisell, and Radiohead , their album, “Riser”, was released in 2017 to wide acclaim in Europe and the US. The release tour in 2018, supported by Arts Council England, included appearances at London and Cheltenham jazz festivals, and at Love Supreme, as well as live performances on Jazz FM and BBC Radio 3. Subsequently nominated for Breakthrough Act of the Year (Jazz FM), the band are currently preparing the follow-up album, due for release in 2020.

For established giant of the UK jazz scene, Dave O’Higgins, this is his 21st CD as leader. O’Higgins & Luft lead a quartet with Northern Irish organist Scott Flanigan and American drummer, Rod Youngs. The repertoire is made up of Thelonious Monk compositions (expect some rarely heard ones!) and tunes played by John Coltrane with special reference to his choice of standards and various collaborations in the 1950s.
Both Monk and Trane were “modernists”, but also steeped in swing and the rich tradition of the beboppers. Dave and Rob intend to respect this lineage whilst putting their own mark on it. Expect some swing, fun, grooves and moods from this exciting new collaboration.

Songs of Love and Exile
For this new project, Elina Duni is joined by guitarist Rob Luft, acclaimed as one of the rising stars of London’s flourishing contemporary jazz scene. Luft’s playing incorporates echoes of West African high-life, English folk and indie rock, and his joyously original sound finds an ideal counterpart in Elina Duni’s vocals. Together, they take us on a journey through timeless folk songs which still resonate so truly today.

Rob co-founded the tango quintet The Deco Ensemble in 2013 whilst studying at The Royal Academy of Music and has performed with them at The National Philharmonic (Warsaw), The Purcell Room (London), Salle Cortot (Paris), Ministry of Culture (Bratislava), Palazzo Brancaccio (Rome), as well as in many other major European cities.

‘Encuentro’ is their debut album, released in July 2015, in which the members of the Deco Ensemble have combined their spirit of fearless exploration to re-imagine the Tango Nuevo Quintet, combining classical, jazz and traditional music influences.

‘Encuentro’ features works by a handful of the foremost Argentinian composers of tango music, including Astor Piazzolla & Gustavo Beytelmann, as well as compositions by the Belgian contemporary classical composer Frédéric Devreese. 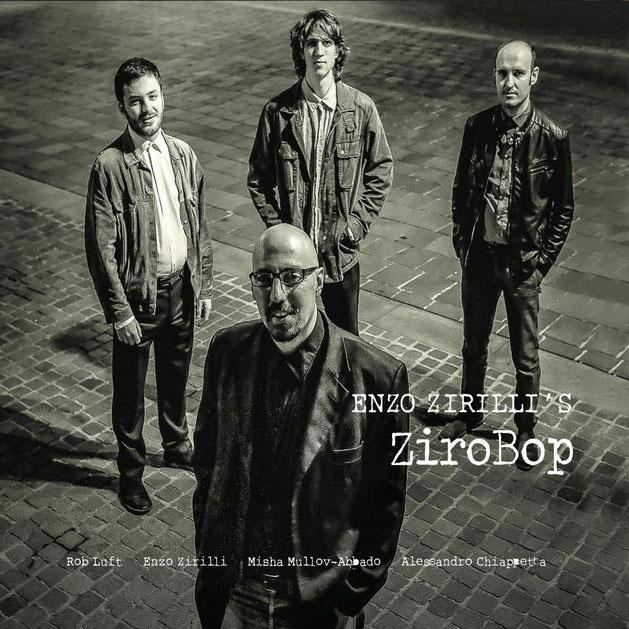 Drummer Enzo Zirilli moved to London in 2004, from his native Turin. Over the last decade he has become one of the most sought after drummers on the London scene and beyond, working with the likes of Jim Mullen, Stan Sulzmann, John Etheridge, Tom Harrell and Jason Rebello, to name but a few. In 2014 he formed the band “ZiroBop” with Italian guitar maestro Alessandro Chiappetta and two English rising stars: guitarist Rob Luft and bassist Misha Mullov-Abbado.

Four Corners is the latest project from celebrated British jazz trumpeter, Byron Wallen. The music takes its inspiration from the human soul from all corners of the earth. Landmarks of blues, mode and groove are explored and re-invented. Byron’s written pieces are systematically broken down into spaced-out jams, almost telepathically abstract and Grateful Dead-like at times, where you’re left wondering (in the best possible sense)  “are they even playing music now, or…?”. The group also features American drummer Rod Youngs and rising UK tuba player Theon Cross.

The trio have been close collaborators since early 2014 when Burgoyne and Luft were both students at the Royal Academy of Music in London where Speake is a professor. Unquiet Quiet is the debut recording by the trio, and it was recorded in the space of a single, cold February afternoon in a small, acoustically beautiful studio on the south coast of England. Comprising of predominantly first takes, the music is heavily improvised and sculpted around the nucleus of Burgoyne’s strong, sketch-like melodies, inspired by particular characters, landscapes and memories. At just under thirty-four minutes long, the recording can be interpreted as a miniature sonic triptych in three parts, punctuated by two fleeting solo percussion interludes. From the cryptic “Imubasam” to the ardent and brooding “Afterthought” the recording features Speake at his most rhapsodic, against the backdrop of Luft’s warm, glowing harmonies and Burgoyne’s abstract rubato drumming. Unquiet Quiet captures a raw and intuitive performance from the Phelan Burgoyne Trio and stands as an amalgamation of the last two years of collaboration, growth and searching together.

Originally from Belo Horizonte in Brazil, Luna Cohen has been making quite an impact on the UK world music scene of late. In 2016 she launched her 4th album “November Sky”, featuring both Rob’s guitar playing and three of his original compositions, as well as several leading exponents of Brazilian jazz, including Gabriel Grossi, Jurandir Santana and Anthony Cruz.